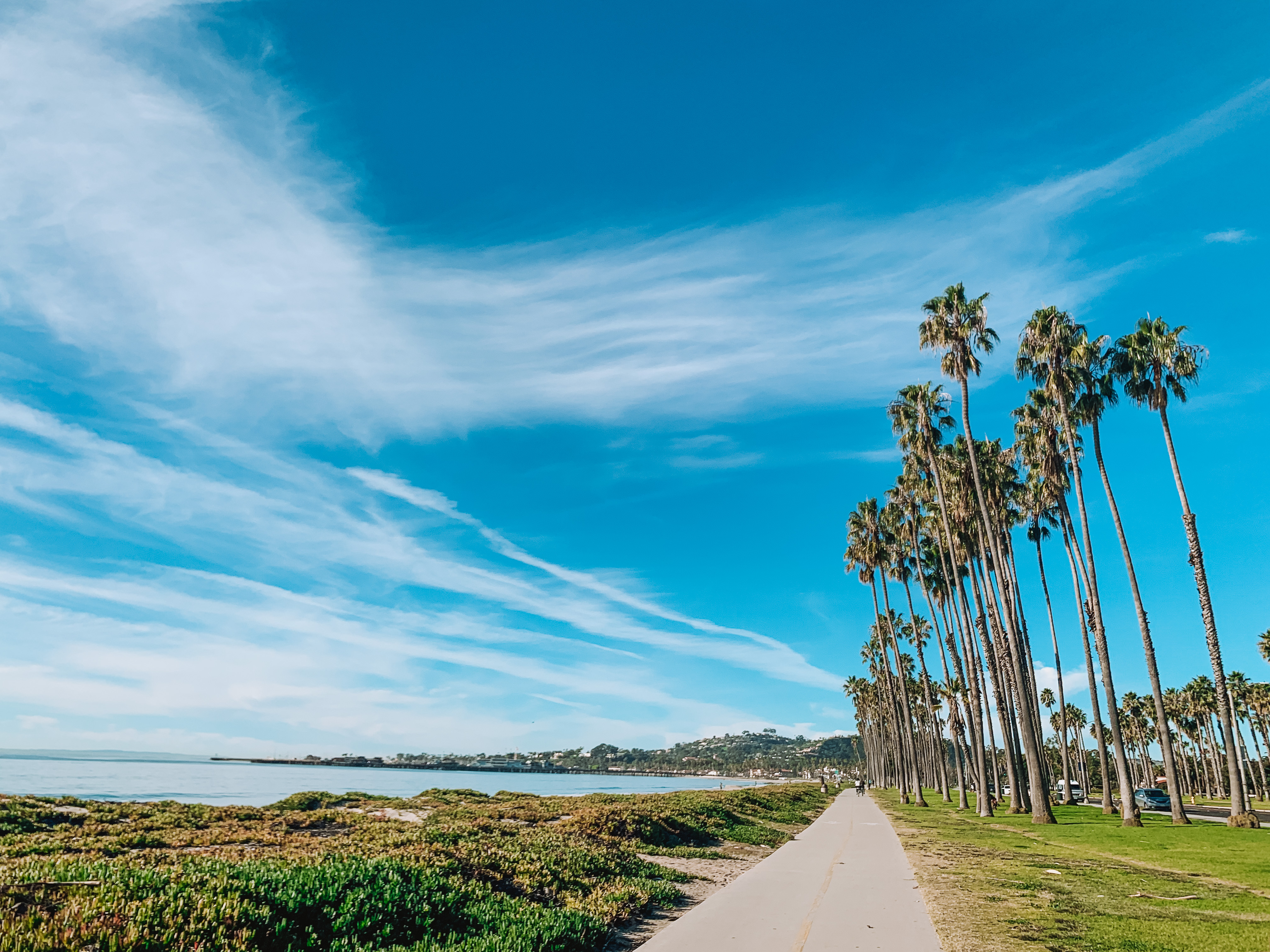 The Spaniards who founded Santa Barbara in 1782 were soldiers and priests, not seafaring men. Perhaps that is why no provision was made for a harbor. The waterfront, extending 3.6 miles from Shoreline Park to the Bird Refuge, offered no natural, safe anchorage. Early-day mariners used to drop anchor a mile offshore, ready to slip their cables and head for the open sea if foul weather threatened. The ocean used to cover what today is the City College football field, known as La Playa Stadium.
Today the Santa Barbara Waterfront stretches from the Harbor across from Santa Barbara City College along Cabrillo Boulevard past Stearn’s Wharf to East Beach, which is near the Santa Barbara Zoo and Bird Refuge. There are Hotels and Motels located along the Waterfront, behind which are charming homes, duplexes, triplexes and apartment buildings.

The “Mesa,” a Spanish word meaning “table,” is located on the bluffs just beyond the harbor and extends from the ocean up to the top of the hill. It features both tract and custom homes, as well as luxury homes many with ocean and/or city views. City weather records show that the Mesa’s winter temperatures are 10 to 12 degrees warmer than downtown, and 10 to 12 degrees cooler in the summer.

As you pass through the gate and under the handsome, filigreed sign suspended across Las Palmas Drive, you enter another world - Hope Ranch. Towering palms, planted in the early 1900s, line the main boulevard.
It’s common to see the locals jogging or riding along private trails, or golfing on a manicured green at the La Cumbre Country Club.
Incorporated in 1924, the Hope Ranch Park Homes Association watches over this elite residential area with luxury estates, charming ranch and contemporary style homes. Membership in the association is automatic upon purchasing a home and brings many privileges: private beach, bridle paths, tennis courts, and the use of the Hope Ranch Riding Trails Association.

Bridging a two-mile span which separates Mission and Sycamore Canyons, “the Riviera,” named for its resemblance to slopes along the Mediterranean coasts of France and Italy, rises above the city. Santa Barbarans lucky enough to live on this ridge enjoy custom built homes with unsurpassed views of the city, mountains, sea and islands.

Mission Canyon, along with the Old Mission complex makes up Santa Barbara’s “Mission District.” No residential neighborhood in the city boasts a richer historical background, or offers more relics and landmarks of Old Spanish Days. The varied types of custom homes are a treasure chest of Santa Barbara’s unique heritage.

Some of the city’s earliest and finest homes were built here and it is still one of the lowest density zoned areas in the downtown/city area that has preserved the fine estate and single family home nature of the area. The neighborhood encompasses generally larger lots than most city centric locations, and has sizeable custom homes and wide streets.
The architecture is varied, and includes: Craftsman, Spanish Colonia Revival, Victorian, and Mission Revival style homes. Some Classic California Ranch, along with more contemporary interpretations of Mediterranean style and a few Modernistic homes create this unique environment.

The Westside was originally an open grazing range and farmland. Today this area is a solidly populated neighborhood with a diversity of home sizes and styles all of which have easy access to downtown Santa Barbara.

Few residential neighborhoods of Santa Barbara can boast the rich historical background of the San Roque and Rutherford Park areas. Originally an open expanse of treeless grassland, sloping up to the foothills it is a built-up suburb admired for its sweeping curved streets, luxuriant landscaping, and harmonious blend of many architectural themes - Spanish Colonial, English Tudor, French Normandy, California Redwood, Italian and American Colonial. Most of the homes were built after 1925. San Roque features older, custom homes with charm.

Samarkand means “the land of heart’s desire” in Persian. The name was first applied in 1920 to a deluxe Persian style hotel, formerly a boy’s school. As the dominating landmark of a hilly, elevated neighborhood, “The Samarkand” gave its name to this neighborhood of delightful homes that range from small cottages to larger almost estate-style residences. It is a delightful area of charming homes.

Thank you for your inquiry.